Guillotine like machines have functioned in Germany many years earlier than the real guillotine in France.
The oblique blade and the lunette was adopted later.

The Nazi regime used the "Fallbeil" as the German called the guillotine. Fallbeil means falling axe. The German machines were not as tall as the French, and the material used was more metal than wood.

The two machines shown on this page are placed at Strafvollzugsmuseum in Ludwigsburg near Stuttgart in Germany.

One is from Karlsruhe/Rastatt, the other is from Haftanstanstalt Berlin Lehrter Straße.
The last two small photos are the only ones of the Berlin Fallbeil. 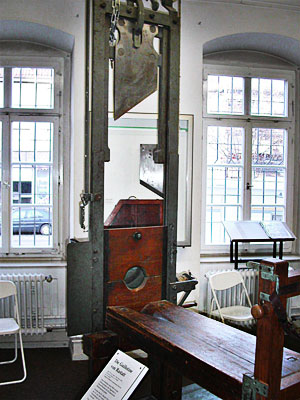